Fun in the Sun

Ahhhh Baja Sur. Right break waves, white sand beaches, volcanic mountain ranges, and epic dirt roads. With the temperature averaging around 82 degrees Fahrenheit each day, I can easily see why this place is becoming the snow-birding central of the west. We’ve run into more gringos enjoying the sun than locals, and English is almost the primary language down here.

As the sun was rising on Day 5, John and myself were already taking in the views of the Pacific from a lonely sand dune close to our beach camp. The group made the tough decision to not travel to Todos Santos to camp with the rally, and the solitude we found paid off. We awoke to being the only people within miles on a beach surrounded by a cacti forest. The drive in was loose and sandy, but easy to travel after airing down a bit.

After breakfast we made our way to Todos Santos to meet up with the rally, and check out the magical village. There are 3 magical villages in Baja, and Todos Santos is one of those. Soon after parking one of our followers on social media found us. His name was Jonathan and he calls Todos Santos his second home in the winter. Driving a Japanese Land Cruiser, he fit in well with our clan of travelers. Michelle gave him a quick tour of Alpha, we restocked on groceries, and headed towards a mountain pass just south of town.

The decision was to cross the mountains and avoid the chaos of Cabo San Lucas. The road headed up a canyon, then things got a bit sketchy. We soon found ourselves on another narrow mountain pass, with large rock steps and steep inclines. However, the views were worth every penny. Towards the 4,000 foot summit you could see the coast in both directions as the valley dropped like a waterfall underneath you. I never would have guessed that mountain ranges this large and rugged existed in Baja Sur.

That night we camped on another remote beach, but it was our first night on the Sea of Cortez side. Soon after Rick started the fire, up the beach came walking down 3 other EarthCruiser owners… not part of the rally!! It felt like a family reunion as we shared stories, laughs and drinks. One of the most amazing things about our family of owners is that each come from different places, cultures, and lifestyles but you would never know when we all get together. It truly is so important to us, and such a unique experience we get to enjoy.

Today was a late start ???? I think the nighttime fun from Day 5 caught up to us all. Luckily it was not a long day, as we headed north with limited off road driving. Because the rally mainly stayed on tarmac this day, Chad and I decided to go back to La Paz to upload more pictures and videos from our trip. We heard that the internet was quick at Home Depot… but their firewall prevented us from access the sites we needed. Then we took off to the only Starbucks around, as a person hinted their wifi was just as fast and unrestricted. The internet allowed us to access the upload sites we needed, but it was still going to take 7 hours to transfer 50Mb of video footage. Calling it a loss, we booked it out of the busy city of La Paz to meet the rally in Ciudad Constitucion.

It was tacos and tequila that night, as the rally posted up in a small RV park where I got my first shower during this trip. Later a group of college students showed up to perform some traditional Mexican dancing. We enjoyed the show, and were soon to bed for the night.

The barking dogs of the RV park kept us up all night, so everyone was not feeling fresh come the 6am wake up call. Getting our waypoints for the day, we raced out of town to fill up and get on a dirt road to San Javier Mission.

SO MUCH DUST. This was the hardest we pushed the entire trip, as all wanted to shorten the day so we could relax on our last beach camp of the rally. I remember looking down and seeing 55mph on the speedo, and we still couldn’t catch the EarthCruiser trucks. Those things move on dirt, and absolutely swallow washboard roads. As Chad and I were trailing in the Tacoma, I knocked about 1 lb of dirt out of the airbox once we got to the mission.

The Mission was gorgeous, and such a unique part of Mexican history. It was surrounded by fruit trees, and small farms. The villagers welcomed the rally participants, and provided tours of the area. Our group split again, as some stayed at the mission for lunch and other headed to the costal town of Loreto.

Loreto is another magical village in Baja, with a historic downtown recognized by the tree arches that cover the streets. Only able to make it a quick visit we jumped on highway 1 to our destination for the night.

The rally set up on such an epic beach location, I can’t even describe it by words. Getting here just before 4pm, our plan was to soak in this last “lazy” night prior to the hard days to come. 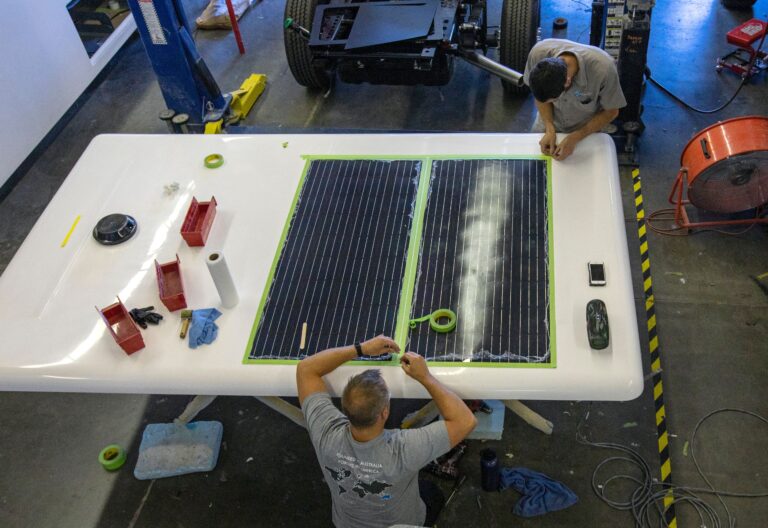