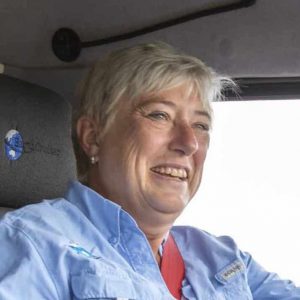 I was supposed to write a travel story this month, and this is sort of one, but I just need to make a little ode to my Goldy. Goldy was Lance and my ‘compromise’ dog after we got married. Lance didn’t want a dog, and I did, so we signed up to be puppy raisers for Guide Dogs Queensland…a one-year commitment to ‘raising’ a puppy that could go anywhere, do anything, and not be phased by new experiences. We got Goldy—a small English lab with a big attitude.

She was a fearless little witch who loved the supermarket (especially the meat case), rode the bus and subway, went everywhere with us, and we were sure she was going to make the best guide dog yet. So after our year, we had to give her back, and although I knew that was the deal, it nearly broke my heart – we took her back on the designated day, and I lovingly handed over all of her ‘stuff’ her beds, her blanky and her toys which they then proceeded to throw in the bin, grabbed her lead and led her off. It was one of the worst days of my life.

But life went on, and a couple of months later, I got a call from a friend who had seen Goldy in the supermarket and found out that she had failed Guide Dog school and suggested we get her back. Well, Lance nixed that idea, so life went on again. Another couple of months flew by, and the same friend called to tell me that Goldy still didn’t have a home. This time, I didn’t ask. I called the Guide Dog people and arranged to pick her up. Apparently, Goldy failed Guide School because she didn’t like clowns, people wearing hats, and was incredibly selfish, couldn’t wait her turn, and didn’t adjust well to the guiding role. She just wanted to be a pet, and as soon as she came ‘home’, she checked to see that her bed (new, of course) and food bowls were in their right places.

Goldy settled in well again to her life. She went everywhere (although not on public transport), did anything, became a late poster child for the Guide Dog Queensland TV ads, represented EarthCruiser, and generally lived ‘the life.’ We brought her to the US with us when we came here, and she adjusted great—traded humidity and the beach for dry and cold with the mountains.

She lived a full life until May 2020, when she crossed the rainbow bridge at 15+ years old. She is still in my closet because although we knew her favorite place was the fridge, we just couldn’t keep her there!

Lance and I went back to Australia for a visit for the first time in years this past month. I really wanted to take Goldy ‘home,’ but the box is sealed, and I didn’t want her to be completely separated from me. After such a long time away from a country that was shut off from the rest of the world for the last two years, I also didn’t really feel like pushing the boundaries with customs trying to explain the ‘dust’ I wanted to return home. But Golds, please know that we went to all of your favorite places, the beach, the dog park, and the river walk, as well as your old neighborhood haunts like Beccofino. You lived your life at the right time, and you had the best of both worlds. Know that you are missed and will always be a piece of me.